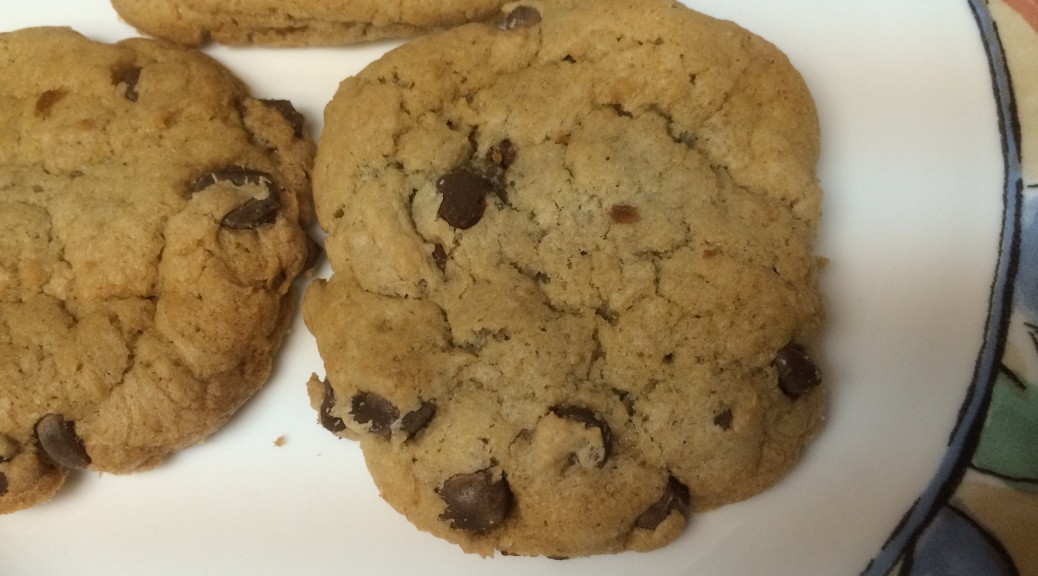 I have to admit, I’m a bit of a gadget slut. There has always been a computer in my household, since I was 5 years old. (The Apple IIe was our first of many.) I got this passion from my dad– for my whole life, he has always collected and/or built a Thing That Does The Thing. In fact, back in the day, we used to bond over building Ham Radio gadgets. …I know: I’m a geek. I was never very good at hiding it.

These days, I drool over the kitchen gadgets, because all of my attention is currently on making delicious foods that won’t make me sick. I’m still learning, which means I need all the help I can get. Honey brought a crockpot into the marriage, so we have two of those, a rice cooker, a Foreman grill, a mini chop, a full-size food processor, an immersible blender, a fondue pot, an ice cream maker, an apple peeler-corer-slicer, a breadmaker, a toaster oven, and a hand mixer.  (I know, right? A HAND mixer? Does anybody even use those anymore? Yes. Yes, I do. Maybe.) I have a kitchen bookshelf: one and a half  shelves are dedicated to cookbooks– I’m running out of room!— and three and a half hold the gadgets– Need more ROOM!

I suppose the next question is, “Do you really need all that crap?” Need? No. With the exception of the ice cream maker, I could probably get the same results using other, more traditional kitchen tools. But they make things easier. And funner. 😀 And really, if it wasn’t fun, I wouldn’t have as much interest in the kitchen.

DO YOU KNOW WHAT THIS MEANS????

Exactly so. I needed a stand mixer. I’ve been drooling over these puppies for a few years now. They’re so SHINY and PRETTY and I WANTed one. I know it’s sacrilidge to say, but I didn’t even care if it was a Cuisinart or a KitchenAid– from what I can tell, they’re essentially the same. Well, thanks to a very generous gift from my employers, I was recently able to acquire one. (OMGOMGOMG Stand mixer!!!! Mixee-mixee-stand-stand-gonna-make-COOKIES. Thankyouthankyouthankyou.)

I showed it to Honey, and he wanted to know why I bought a vintage piece from the 50s. Probably because I bought a brand new one in teal. (Does it look teal on your monitor? If it doesn’t, you need to adjust your saturation. It’s teal. Promise.) It’s teal, and shiny, and brand new, and needed to get used. 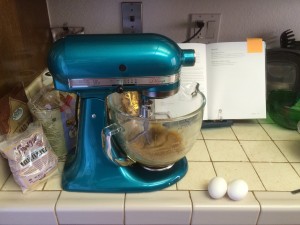 The thing about cookies is, that’s what I cut my teeth on, when I was first learning to bake. You know, first I did the mixes from the boxes, and then I decided to do a recipe from scrrrratch! The first recipe I ever attempted and mastered was chocochip cookies. They’re so easy! Goodness, I had the whole recipe practically memorized. But with the change-over, I could get everything except cookies. Like, I couldn’t even figure out the simplest recipes anymore. (Turns out, cookies are much more challenging without gluten. But I didn’t know that at first.)

I finally broke down and purcahsed some Xanthan gum. Grrr. (I can still make plenty of baked goods without it, but cookies, apparently, require a stronger binder than cakes or muffins.) The reason for this is actually because of Alice Medrich’s latest book, Flavor Flours.

You’ve never heard of her? You should. She writes dessert cookbooks (HOW HAD I NEVER HEARD OF HER BEFORE???), and recently posited the question: what would desserts look like if wheat didn’t exist? Instead of using time-honored techniques (most of which are work-arounds to activate or not-activate gluten), she worked directly with the flours’ own personalities. What she found was that most of the gluten-free flours not only have their own behaviors when baking (ever noticed that most GF recipes call for a combination of flours? It’s to find the right balance that mimics wheat), but that they each have their own delicious flavors, too, which can be used to accent different desserts.

Anyway, I was interested in the book after hearing her interview on Good Food, and bought it when I read her description of Chocolate Chip Cookies. “Oat and brown rice flours give these cookies extra butterscotch flavor– and a beautiful butterscotch color as well. You will love the buttery, crunchy edges and delicate cakey interiors. Most guests are likely to think you’ve simply gone and made some really good chocolate chip cookies; they’ll be hard put to identify the particulars! And if you know people who cannot eat wheat but long for a remembered treat, these are for them as well.” 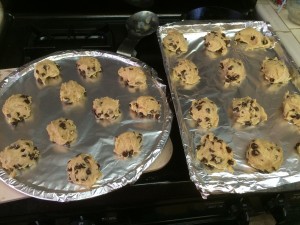 Reading this book– just reading it– was a joy for me, as I witnessed her exploration into the different flavors of flours that most bakers have been overlooking for years. And then I made the Cookies. They are heavenly. Not “good enough for gluten free,” they are “damn good.”

I still want to tinker with her recipe– not to mention my new toy– and see if I can make these cookies using psyllium husks instead. But not today. Today, I just want to eat homemade chocochip cookies that taste like (better than?) the ones I used to make.

The quest is over. Now the adventure truly begins. 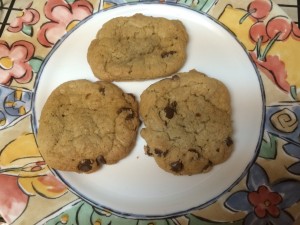