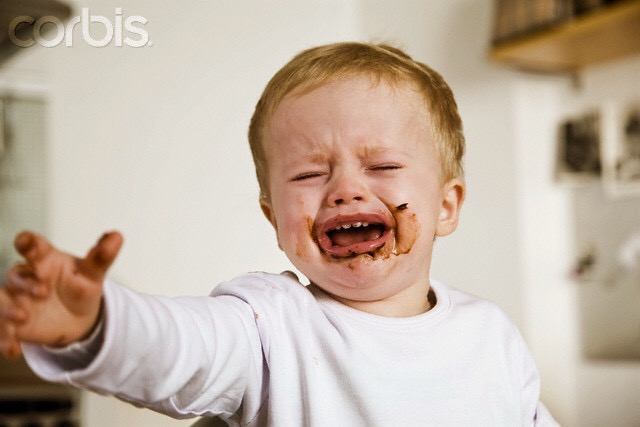 And then I realized, I need a vacation. Not like, “Oh, gee, I should go somewhere.” More like, “I had better take some freaking time off NOW, before I commit some unspeakable acts– you know, the kinds that are illegal, immoral, or the greatest American sin of all: fattening.” (That last bit had actually already started happening, now that I think about it.)

One of the things I know about myself, although it can be hard to remember in the moment, is that when I don’t take care of myself, I get mean. And I turn into a demanding two-year-old. I want the thing. NO. What’s wrong with you? I don’t want THAT thing! Why can’t I have the thing?! GIVE ME THE THING.

I brought up my issues to Honey as calmly as I could, which really wasn’t all that calm. The problem was, I only wanted 3 specific things from my break: lots of sleep, lots of baking, lots of snuggling with the dogs. This was in direct opposition to what he wanted: to get away from it all. (Baking and dogs are more challenging when you leave town– not impossible, but less likely.) After much shouting, pleading, and gnashing of teeth, Honey and I worked out something that would fit both of our needs. While he was attending Strategicon during the three-day weekend, which was only a week or so away, I would peel off a couple of vacation days on either end of the weekend, and have 5 days to myself at the house. Then, a few weeks later, we would both get the hell outta Dodge for about a week.

The plan was perfect! I could sleep and bake and snuggle, and he could get away from it all. And then I got a toothache. (Read about that here.)

I was so pissed! It wasn’t fair! I needed that time to get my brains back, to find my emotional center, to do something I loved besides sitting and moaning over TWO root canals all day long. But I did sleep a lot. And there was much snuggling. The baking, not so much, really, but it did happen once. I went back to work feeling disgruntled from the way my perfect plan had worked out, but secretly rather refreshed from all the extra sleep and snuggles.

But here’s the funny thing: I’m not mad. I don’t mean about the root canal drama– that sucks any way you look at it (almost). I mean I’m not angry all the time anymore, and I’m not (as) mean. In addition to that, as part of the root canal process, I had to go on antibiotics for a while, and it turns out those cleared out another issue I had been monitoring (read: desperately hoping I didn’t need to go to the doctor to fix), so that was an odd sort of bonus. But more than that, I was driving home from work the other day, and I saw a shoppe I haven’t been in for the longest time, and I almost pulled over to go in. In fact, if I hadn’t been on a bit of a schedule that night, I would have.

I think, even though it didn’t go the way I wanted, the super-extra-long weekend really helped. I can’t wait to see how much better I feel when we get outta Dodge in the next few weeks.

All this to say, vacations are more than just fun. They are ncessary to our mental (and physical!) health, even if you love your job. Seriously, if it’s been more than 6 months since your last break– and I DON’T mean sick days– you need to take some time off. You’ll thank yourself for it, and so will all the people who have been wondering when you turned into a two-year-old. Or maybe that was just me.
Image found here: http://www.corbisimages.com/images/Corbis-42-24162387.jpg?size=67&uid=a9ff6662-0aba-4380-8f2e-593cad9ba72c