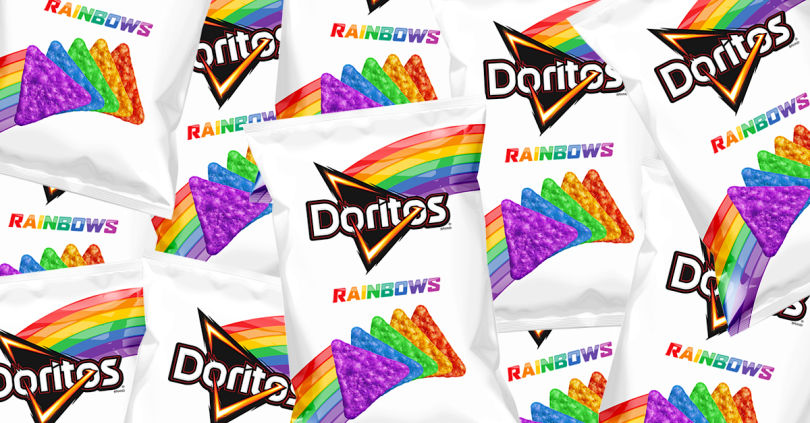 I’m starting to understand more deeply where my rage has been coming from. Oh, there’s the hormones, and the lack of sleep– and that awful heat certainly didn’t help. But there’s also so much mudslinging happening online right now. Everyone is accusing everyone else of having a horrible political agenda that is ruining this country! Or so they say.

The one that shocked me silent– not an easy feat– was the Doritos thing. Frito-Lay put together a specialty pack of rainbow colored Doritos, which were only available through one specific website. They are not going to any stores, and cannot be purchased anywhere but from that one site. All proceeds from the sales will be going to support an organization that is fighting teen suicides resulting from bullying. The offerings sold out that same day.

And yet some people were furious. Self-identified Christians (people whom I thought were supposed to love their neighbors just like their main dude did????) went to the Facebook page for this event and flamed Frito-Lay, saying that they were once strong Dorito fans, but they would never again buy these chips, because Doritos supported gay people. More than one was offended at some political agenda “being shoved down [their] throat[s].”

Can we take a look at that for a moment? Doritos are a snack food– not even something everyone has a right to by law or even by the grace of God. This ranks lower than the rights to an attorney, or the right to clean water, or the right to an equal wage for equal work, or the right to not get fired for being pregnant. Seriously, Doritos are a low-cost luxury, one that you choose to purchase or not purchase with your own dollars. There is not one government or political agency anywhere that is required to provide Doritos to anyone.

This private company chose a separate space to offer a specialty product as a fundraiser for a non-profit organization that fights suicide and bullying. The specialty product was not available in any stores, and honestly, if a consumer wasn’t interested in it, all they had to do was not click the link, and that would have been the end of it.

Let’s compare this to, say, a government employee (Bear with me. This will all connect if you read to the end.) who breaks the law, breaks her vow to uphold the Constitution, and refuses to do her job, because she claims that doing her job is against her religion– a religion that claims to promote forgiveness, loving thy neighbor, and treating people with, you know, basic decency. For someone who claims to be a follower of the guy who threw the money lenders out of the Temple (which was a Jewish synagogue, by the way) and who chose to hang out with the whores rather than the Highly Respected Members of the Community, it kinda feels like someone isn’t paying very good attention. But regardless, the problem is that she is an elected official, whose paycheck comes directly from the government she represents. Hers is a public and political position, and from that position, she was arbitrarily refusing legal services to certain members of her own community, based on her own biases.

Are you following this?

One entity is a large, private-sector company running a side project to raise funds for people who are being abused to the point where they would rather die than live under that torment anymore. The other, a woman upheld as a hero by her religious community, who was refusing legally-granted services to members of the community she swore to serve, and if those members don’t like it, their only choices were to suck it up or to physically move their residence.

Tell me again which group is shoving a political agenda down everyone else’s throats? Was that the ones who are being bullied literally to death, the ones who sell colorful junk food, or the ones who use a position of power to enforce their arbitrary religious values on everyone else around them?

(I wonder how many of those people giving up Doritos to prove their point will switch to the Ruffles with ridges?)